Samsung remains a totem of the mobile market (and many others) and has not left us without its second Unpacked of the year. Well loaded and with two (perhaps three) flagships. All of them with a clear captain who inherits the grandiose last name in fashion and that we have been able to gut in the Samsung Galaxy Note 20 Ultra analysis. Together with his faithful squire, the S Pen.

A mobile whose genetics still maintain the less and fewer characteristics of this family and that thus manages to remind a lot of its predecessor. The Samsung Galaxy Note 10+. Still, there are some changes in the experience and design that we will see throughout this article. Is it a mobile, as promised, prepared to the brim for productivity and gaming? We tell you if it convinces us or not in these and the rest of the use areas.

Design: The Pinkish Intersection Between Right Angles, Curves, And A Large Rear Module

The curves, the hole in the screen, the exaggerated modules. It seems that in terms of aesthetics, the Galaxy S propose and the Note has, although for now, the Samsung stylus model continues to maintain certain hallmarks. We are talking, for example, of corners at right angles on their vertical axis, with upper and lower edges that close as if they were two covers and thus leave a more angled profile and different from that of the Galaxy S series.

Although this does not mean that there are no curves, quite the opposite, speaking of the horizontal axis, the Note 20 Ultra draws a perfect hemisphere on each side, as if those “caps” on the top and bottom edges guide the screen and the back to meet the thin aluminum frame. A discreet and elegant continuity solution that also serves to house the side buttons.

Speaking of the buttons, it is one of the aspects in which there is a change. However, it is a variation that remained previously seen through the evolution of the Samsung Galaxy S10 toward the Samsung Galaxy S20: the physical buttons go from the left side to the right. So the S Pen is now inserted on the left side and not on the right. Something that will not remain noticed in the experience if we have a previous Note beyond getting used to.

Something that also stands out (and that many of us appreciate) is that the back is matte. A finish that is reminiscent of the iPhone 11 Pro or the Huawei P40 Pro and that by way of in the first (not as in the second) does not slip, trendy addition to resisting quite well to fingerprints and dirt in general (no miracles).

The Back Does Not Slip, Plus It Resists Fingerprints Quite Well 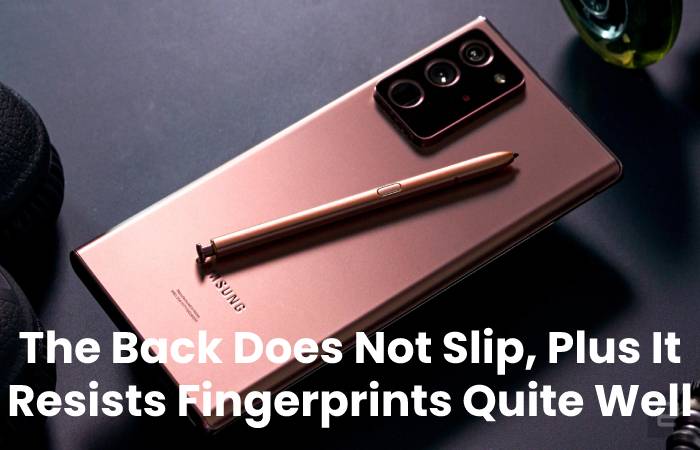 The back, unlike the base Note 20, is made of glass. The frames are metallic and contrast with the matte on the back as they have a chrome finish, and in our case, we have tried the pink or Mystic Bronze model, which is quite attractive, although we do not particularly like the more striking tones. It is much more discreet than the tone that we saw last year in the Note 10, in fact, and they have achieved a rather curious play with the light so that depending on the environment, we will see a more bronze or pinkish tone.

With mobiles accommodated in 8 and 9 millimeters in general, the new Note 20 Ultra is not strictly thin. Still, this curvature that we described earlier helps the thickness disappear even if it reaches 8 mm. It is comfortable and somewhat heavy, but in this sense, the average again saves you because it does not weigh much more than other non-compact phones and does not reach more than 220 grams of the S20 Ultra, the P40 Pro + or gaming phones such as the Black Shark 3 Pro.

We see that the Note 20 Ultra weighs the same as the Xiaomi Mi 10 Pro with a larger diagonal screen, lower volume, and a battery of the same capacity. Still, as a good Ultra, it is above more compact proposals such as the Sony Xperia 1 II.

Perhaps one of the key questions regarding design and construction is whether that large rear module creates the “rocking effect” when we use it while leaning on the table, and the answer is clearly yes. It should remain said that a case is not delivered with the mobile, when today we see it in many mid-range mobiles as something common, and that this balancing already occurred with the S20 Ultra module (which stands out somewhat less).

Speaking of other surfaces, despite the thickness of the mobile, we do not see an audio minijack, thus following in the wake of its predecessors. The left side is free of buttons and any other element, and the tray for the SIM / microSD is on the upper edge without being aligned horizontally. At the base is the USB type C. It remains aligned like the speaker and the microphone, and the entrance of the S Pen, which barely protrudes when it remains inserted

The front is quite reminiscent of the Note 10 because of that hole in the middle of the screen for the camera and quite reduced frames for a new curved panel. We will talk about it in-depth. But due to precedents and as one might think. The sensation of “all screen” remains quite achieved.

Software: One Ui Still Doesn’t Flow As It Should, But It Fits The Note Like A Glove

The Samsung Galaxy Note 20 Ultra comes to us with a new version of the house’s software: One UI 2.5. The personalization layer added to Android 10 maintains many points in common with what we saw in the Galaxy S20. Although with some additions.

In the pre-loading of the system. We can choose whether or not to install certain Samsung and third-party apps so that if we are not interested and uncheck. We will have a fairly downloaded start. Also, around is approximately less notification once the system boots up completely besides that bombardment that we still saw in the S20 Ultra is left behind. Which is abundant appreciated.

Hence, we can start with a fairly uncluttered desktop or app drawer. With little more than Google apps and basic tools. Of course, although we can uninstall third-party ones (Facebook and Netflix) and some from Google. Others like OneDrive can only be deactivated. And to this is added the automatic updates that can reinstall any deleted or not installed apps. Such as Facebook or the transcription app.

We have already talked about the screen settings. With which we can further customize the appearance of the home screen and activate the dark mode. Speaking of the general settings, the usual sections are maintained. Which are quite deductive, and the search engine is barely used (which also works well).

In this menu. We also find settings for the sound that we will see later and maintenance tools and parental control. In the advanced functions section, the S Pen tools remain added as in the previous Note. Which we will see in detail in the next area.

It is also where we can activate and configure the Bixby Routines. It is one of the most interesting parts of the Samsung virtual assistant. Especially if we do not usually resort to voice calls. On this occasion, there are also many more routines proposed as a standard. Attending too many environments (in the car, at work, charging the mobile, etc.) that. Although they do not fit us for our usage patterns, can give us ideas to configure others from scratch.

In Advanced functions, we can also change the power button’s configuration. Which by default has the activation of Bixby for a long press and not to turn off the phone. Although what can change our interaction a little more is the Movements and gestures section. Where we can activate the Smart Stay (that the screen stays on when looking at it). The double-tap to wake up or lift to start the screen options.

Speaking of interaction. Samsung seems to have given importance to vibration feedback and has added them by default toward the camera or the insertion of the S Pen to persons that already exist. We can deactivate them in any case. Since there are cases such as the keyboard or each time an app remains minimized that in the end. They get tired. Samsung Galaxy Note 20 Ultra

digital well-being and Game Booster tools remain also preserved. The latter is not so noticeable in the use of hardware resources. But it does mean quick access to interesting settings and functions during the game to not get out of the game much.

It is a fairly complete layer that adds interesting tools and helps make sense of this mobile. Especially in these two tools that we will now detail. It is true that it is still heavy and demanding and that it is less fluid than other software (it looks good in transitions. Especially between horizontal and vertical modes). In addition to that, in version 2.5. We consume had some errors when trying to update Chrome and the website that does not occur in 2.1 and do not quite get lengthways with the Netflix app at rest. But there are no unexpected closures, crashes, or reboots.Samsung Galaxy Note 20 Ultra

The Best Android Phones You Be Able To Buy In 2021