What Did The Big Car Brands Do Before Making Vehicles?

And some have evolved from the four-wheeled product to heavy machinery, passenger ships, and major engineering works.

Here are some of their stories.

Since most Japanese used bicycles after the war but did not have the funds to purchase scooters, Honda saw an opportunity for low-cost motorized transportation.

It did so by disassembling Mikuni Shoko’s two-stroke gasoline engines from leftover generators used to military power radios. Honda launched his Company in 1946, taking the motors apart, rebuilding them, and equipping them with a transmission system and bicycles.

In 1947, Honda built the Type A, the Company’s first complete moped, followed in 1949 by the D-Type Dream, the first Honda motorcycle. The 1962 S-360 two-seater convertible was Honda’s first four-wheel product (although in 1970, as the photo shows, motorcycles were still their big business). 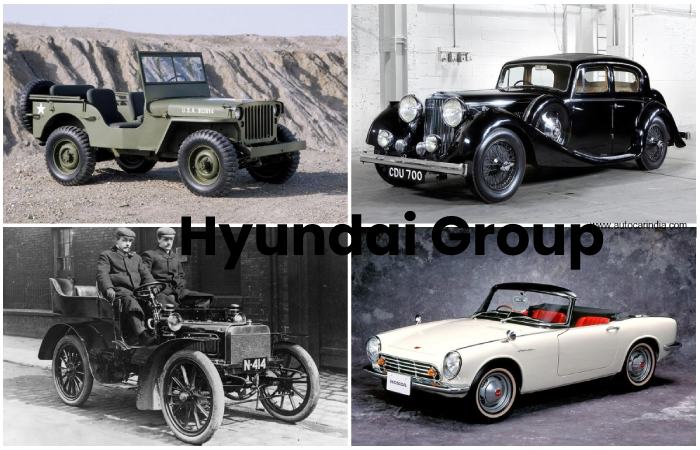 Chung Ju-Yung started his Seoul rice shop in 1937 when he bought it from his employer.

With the end of the Japanese occupation of Korea at the end of World War II, Hyundai Togun, the initial Company of the Hyundai Group, was established as a construction company, building bridges and infrastructure for the US Army.

Hyundai Motors started operations in 1967, and the group diversified into shipyards and shipbuilding in the 1970s and then electronics in the 1980s.

Hyundai’s initial car production consisted of low-budget designs licensed from Mitsubishi; That is, a far cry from the $ 70,000 top-notch Equus sedan.

In 1927, SS expanded to offer a two-seater body for installation on an Austin Seven chassis. The Company moved to Coventry in 1928, when it also developed products to make chassis bodies from three different manufacturers.

Due to the unsavory connotations of the Company’s initials “SS,” it changed the name to just Jaguar after WWII. In 1948, the Company launched the XK120 sports car, and the die was cast (in the photo, the Model B Beria, from 1949).

In the instant aftermath of World War II, Ferruccio Lamborghini realized Italy’s need for agricultural tractors and, in 1948, launched the Lamborghini Trattori to meet the demand.

In 1965, the Company opened a new factory and, in 1968, began selling tractors using Lamborghini’s engines rather than buying them from outside suppliers such as Mercedes-Benz.

However, legend has it that when Lamborghini made recommendations to improve his car, Ferrari dismissed them, telling the agrarian businessman to return to tractor construction.

Instead, Lamborghini began construction of a factory in Sant’Agata Bolognese in 1963, where it would launch production of the V-12 350 GT, a traditionally styled Italian sports coupe.

But it was at the 1966 Geneva Motor Show, Lamborghini unveiled the radical Miura prototype, the scene in which the entrepreneur once and forged his reputation as a maker of mid-engined, mid-engined super sports cars.

Mitsubishi began activities in 1873 as a transportation company when Yataro Iwasaki incorporated the remnants of the Tosa clan assets after the Japanese government abolished the remaining feudal domains.

Commercial lines expanded to Shanghai in 1875 and began transporting mail under government contracts.

With raw resources on the one hand and the need for ships. Mitsubishi wisely moved into shipbuilding in the early 1900s. The Company also expanded into mining, opening coal mining operations. At the same time, the transportation business expanded into the rail, warehousing, banking, and insurance operations.

In 1911, Mitsubishi built a hydroelectric power plant for the city of Tokyo. Although the city did not yet need a large-capacity plant. Meanwhile, in 1917, the Company created the Model A, its first production passenger car.

Finally, Mitsubishi Heavy Industries emerged in 1934 as a piece of heavy machinery, aircraft, and industrial equipment supplier. Which materialized in the Mitsubishi A6M Zero fighter plane of World War II.

The technological highlight of the Company’s car may have been the introduction of the balance shaft. Engine technology was subsequently used under license by Porsche, Saab, and Fiat.

Jean-Pierre and Jean-Frederic Peugeot founded Peugeot Freres in 1810 when they converted their father’s mill into a steel foundry and began manufacturing many items. Such as coffee grinders, saw, and umbrellas mounts.

In 1886, the Company began mass production of large wheeled cycles before moving on to the modern style of “safety” bicycles with identical size wheels.

Armand Peugeot conducted experiments with a three-wheeled steam car in 1889 and then built his first gasoline-powered car in 1890. The Type 2 four-wheeler, using a Daimler engine.

Jamsetji Nusserwanji Tata opened his private financial trading company in 1868 and then continued with a textile company. The Central India Spinning, Weaving, and Manufacturing Company, in 1874. From there, the Company expanded into hospitality by opening the Taj Mahal Palace. Considered the first luxury hotel in India.

Tata Steel remained incorporated in 1907. And the Company added electric power to its portfolio with the creation of the Tata Hydro-Electric Power Supply Company in 1910.

Tata Consumer Goods arrived in 1917, followed by Tata Airlines in 1932 and the Tata Engineering and Locomotive Company. The forerunner of today’s Tata Motors, in 1945.

After suffering wartime damage to its other facilities, Suzuki consolidated its operations in Shizouka in 1945. In 1947 the Company managed to return to Hamamatsu with a change of industry: it launched a two-stroke gasoline engine moped. The “Power Free, “in 1952.

Sales skyrocketed, and the Company introduced the “Diamond Free,” a more powerful 60cc moped the following year. With a new name change in 1954, Suzuki went on to build complete motorcycles with the 125cc Collada in 1955; in October of that year, it also introduced the Suzulite, a 360 cc miniature car

The original loom operations remained segregated in 1961, and the automaker’s first subcompact car, the Fronte, was introduced in 1965.

In addition, you can read more helpful posts at techinfoday

Review What Did The Big Car Brands Do Before Making Vehicles?. Cancel reply

Industry 4.0: Skills Aimed At The Future Of Work

Business Ideas For Cities With Beaches

All You Need To Know About Product Owner As a Career

5 Things to Consider Before Creating a Will Online

The Truth About SEO: Challenging the Myth That SEO Is Dead

What are Citec Partner Directory Types Of Photography